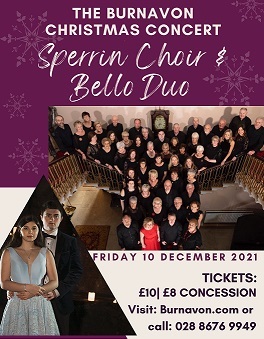 Join us at the Burnavon for our annual Christmas Concert.

The Sperrin Choir Ensemble, consisting of twenty choir members conducted by its musical director Sam Cuddy and accompanied on piano by Gail Evans, will be performing in the Burnavon’s Christmas Concert.

This Mid Ulster choir’s programme will feature a range of sacred and contemporary songs which celebrate this special time of the year. The Sperrin Choir Ensemble will sing the Christmas classics “Silent Night” and “White Christmas”, and the modern “Sending You a Little Christmas” as well as many other carols and seasonal songs.

Also appearing will be Bello Duo. Bello Duo are a classical-crossover and musical theatre singing couple from Co. Antrim . They have featured on UTV, Virgin Media One and RTE.

After hitting No.1 in South Africa, No.4 in the UK vocal charts, and having their own radio show on London FM, they then went on to make it to the final of ‘The Big Deal’ performing for big names such as Boy George in the 3 Arena, Dublin.

Prepare yourself for a night of spectacular music featuring songs such as ‘The Prayer’, ‘Time to Say Goodbye’ and of course, some Christmas Classics!